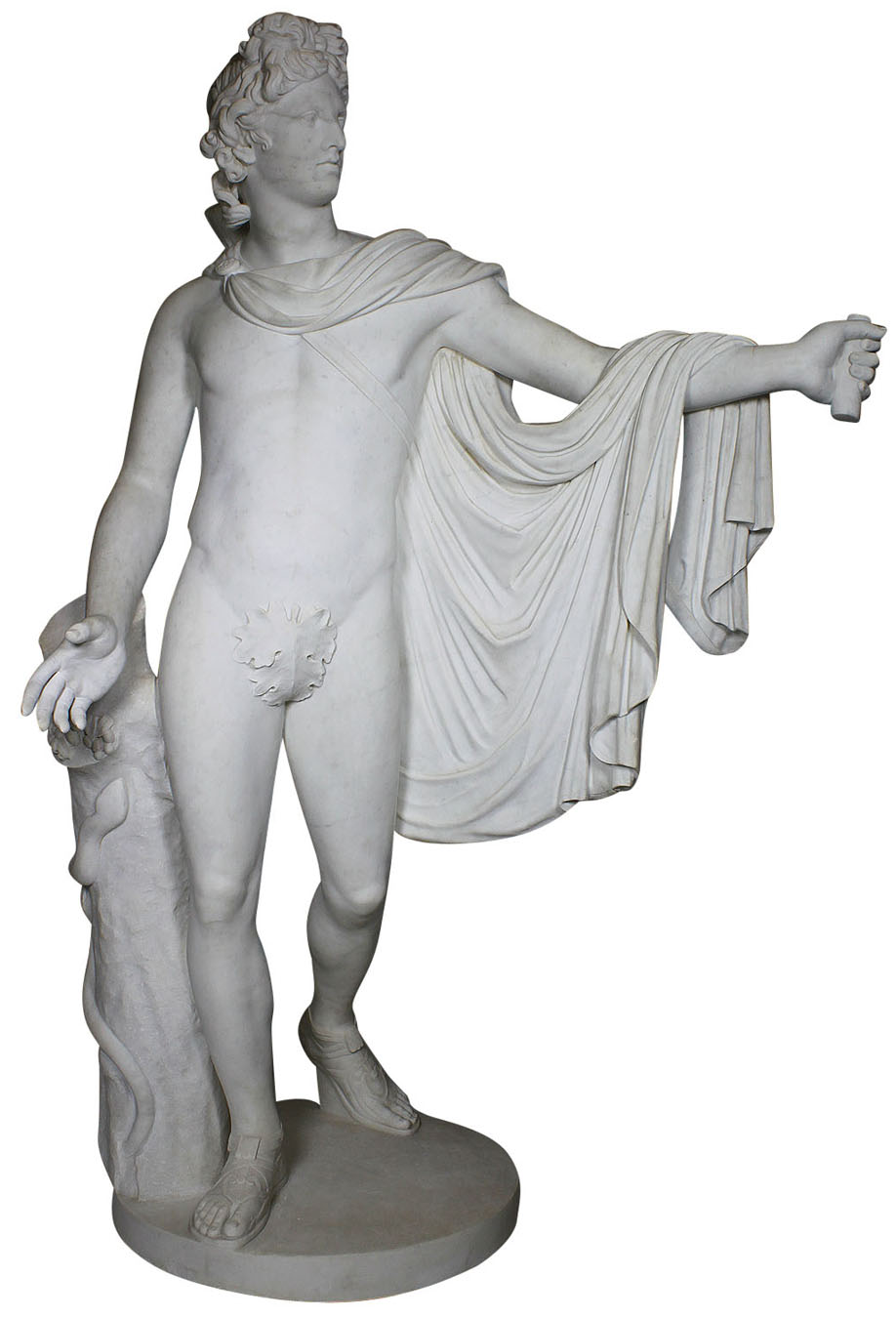 Ferdinando Vichi (Italian, 1875-1945) A Fine and Life-Size Italian White Carrara Marble Greco-Roman Figure of The Belvedere Apollo, After the original, now in the Vatican Museum, The Belvedere Apollo has defined the Greek aesthetic ideals of harmony, noble simplicity and quiet grandeur. Apollo is depicted as an archer, having just killed the Python of Delphi. The carved figure displays the tension lingering as if the arrow has just left his bow. Standing on an oval base inscribed: F. Vichi, Firenze, Made in Italy. Circa: Florence, 1895-1900. 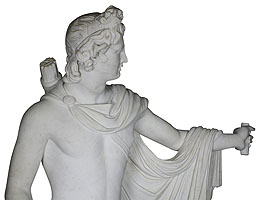 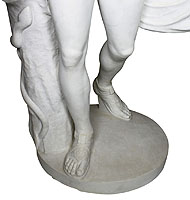 Sutro was born in Prussia on April 29, 1830. He made a fortune building tunnels during the California Gold rush. He then moved to San Francisco and increased his wealth by turning to Real Estate. His investments included such iconic San Francisco places as Land's end (which include Lincoln Park and the current Cliff House ) and of course the Sutro Baths. Although he served as San Francisco's 24th Mayor he is perhaps best remembered for the landmarks that bear his name.

Sutro also had a passion for collecting. His library which was destroyed in the 1906 fire was said to be the largest private library in the world. His compulsion for collecting reflected a keen intellect with eclectic tastes.

In 1896 he built a new house – a seven story Victorian which became known as "the Gingerbread Palace" below his estate on the bluffs of Sutro Heights. Here his collector's eye returned to the Classical and he lined the bluffs around his house with an array of Mythological and Iconic statues creating the effect of a Greek temple. In keeping with his populist view Sutro opened his home and the grounds to the public on Sunday. Vistors included local working families, the cities social elite as well as three US Presidents.

Sutro died in 1898. In the thirties, the Whitney family took possession of the Cliff House and in the 70's when they closed Playland and Sutro Baths they decided to offer the public an opportunity to own a bit of San Francisco history from these memorable sites as well as what was left from the original collection acquired by Adolph Sutro.

The sale began on January 22, 1971 at the Cliff House and lasted eleven days . According to an article in the San Francisco Examiner dated Jan 15, 1971 "Egyptian mummies, an Alaskan kayak, bathing suits used at the 1900 Sutro natatorium, marble statues..." were on sale. Those lucky enough to participate were indeed able to preserve a piece of history as evidenced in the offered lots.

The Apollo Belvedere or Apollo of the Belvedere also called the Pythian Apollo is a celebrated marble sculpture from Classical Antiquity. It was rediscovered in central Italy in the late 15th century, during the Renaissance. From the mid-18th century, it was considered the greatest ancient sculpture by ardent neoclassicists and for centuries epitomized ideals of aesthetic perfection for Europeans and westernized parts of the world.

The Greek god Apollo having shot a death-dealing arrow, the episode represented may have been the slaying of Python, the primordial serpent guarding Delphi making the sculpture a Pythian Apollo; alternatively it may represent the slaying of the giant Tityos, who threatened his mother Leto, or the episode of the Niobids.

The Apollo is thought to be a Roman copy of Hadrianic date (ca. 120-140) of a lost bronze original made between 350 and 325 BC by the Greek sculptor Leochares.

Before its installation in the Cortile del Belvedere, the Apollo which seems to have been discovered in 1489 at Anzio, or perhaps at Grottaferrata where Giuliano della Rovere was abbot in commendam apparently received very little notice from artists. It was, however, sketched twice during the last decade of the 15th century in the book of drawings by a pupil of Domenico Ghirlandaio, now at the Escorial. Though it has always been known to have belonged to Giuliano della Rovere before he became pope, as Julius II, its placement has been confused until as recently as 1986: Cardinal della Rovere, who held the titulus of San Pietro in Vincoli, stayed away from Rome for the decade during Alexander VI's papacy (1494–1503); in the interim, the Apollo stood in his garden at SS. Apostoli, Deborah Brown has shown, and not at his titular church, as had been assumed.

Once it was installed in the Cortile, however, it immediately became renowned and a demand for copies of it arose. The Mantuan sculptor Pier Jacopo Alari Bonacolsi, called "L'Antico", made a careful wax model of it, which he cast in bronze, finely finished and partly gilded, to figure in the Gonzaga collection, and in further copies in a handful of others. Albrecht Dürer reversed the Apollo's pose for his Adam in a 1504 engraving of Adam and Eve, suggesting that he saw it in Rome. When L'Antico and Dürer saw it, the Apollo was probably still in the personal collection of della Rovere, who, once he was pope as Julius II, transferred the prize in 1511 to the small sculpture court of the Belvedere, the palazzetto or summerhouse that was linked to the Vatican Palace by Bramante's large Cortile del Belvedere. It became the Apollo of the Cortile del Belvedere and the name has remained with it, though the sculpture has long been indoors, in the Museo Pio-Clementino at the Vatican Museums, Rome.

In addition to Dürer, the Apollo was sketched and copied by several major artists during the late Renaissance, including Michelangelo, Bandinelli, and Goltzius. In the 1530s it was engraved by Marcantonio Raimondi, whose printed image transmitted the famous pose throughout Europe.

The Apollo became one of the world's most celebrated art works when in 1755 it was championed by the German art historian and archaeologist Johann Joachim Winckelmann (1717–1768) as the best example of the perfection of the Greek aesthetic ideal. Its "noble simplicity and quiet grandeur", as he described it, became one of the leading lights of neo-classicism and an icon of the Enlightenment. Goethe, Schiller and Byron all endorsed it. The Apollo was one of the artworks brought back to Paris by Napoleon after his 1796 Italian Campaign. From 1798 it formed part of the collection of the Louvre during the First Empire. After the fall of Napoleon (1815), it was repatriated to the Vatican where it has remained ever since.

The neoclassical sculptor Antonio Canova adopted the fluency of the Apollo Belvedere for his marble Perseus (Vatican Museums) in 1801. The Romantic movement, however, was not so kind to the Apollo's critical reputation. William Hazlitt (1778–1830), one of the great critics of the English language, was not impressed and dismissed it as "positively bad". The eminent art critic John Ruskin (1819–1900) wrote of his disappointment with it. Finally, starting something of a trend among later commentators, the art critic Walter Pater (1839–1894) adverted to the work's homoerotic appeal by way of explaining why it had been so long lionized. Nevertheless, the work retained much popular appeal and casts of the it were abundant in European and American public places (especially schools) throughout the 19th century.

Ferdinando Vichi was a central figure in the production of Florentine sculpture at the end of the 19th century. He is associated with the sculptors Cesare Lapini, Pietro Bazzanti and Guglielmo Pugi, all of whom executed works at The Galleria Bazzanti. The gallery, originally Bazzanti's studio, was inaugurated in 1822 and is still open today. His compositions are varied in subject matter, ranging from busts after the Antique to orientalist themes and Renaissance-inspired models. Like many other late nineteenth-century sculptors, Vichi often took inspiration from classical antiquity. The English inscription "Made in Italy" suggests the present sculpture was carved for export to England or America. Historicising romantic subjects were very popular in Italian sculpture of the late 19th century.